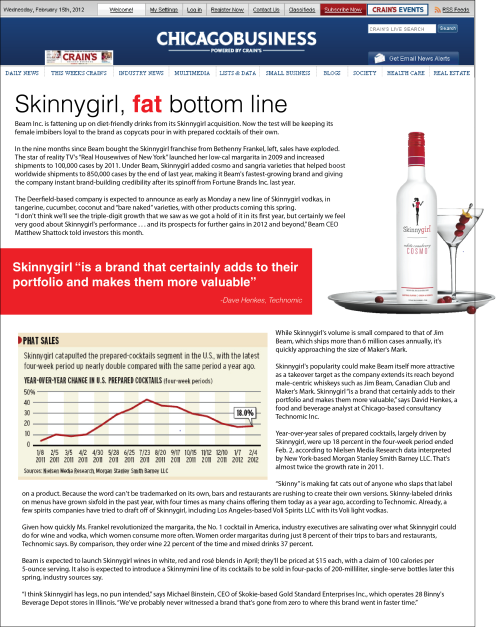 Skinnygirl, Fat Bottom Line
Beam Inc. is fattening up on diet-friendly drinks from its Skinnygirl acquisition. Now the test will be keeping its female imbibers loyal to the brand as copycats pour in with prepared cocktails of their own.

In the nine months since Beam bought the Skinnygirl franchise from Bethenny Frankel, left, sales have exploded. The star of reality TV’s “Real Housewives of New York” launched her low-cal margarita in 2009 and increased shipments to 100,000 cases by 2011. Under Beam, Skinnygirl added cosmo and sangria varieties that helped boost worldwide shipments to 850,000 cases by the end of last year, making it Beam’s fastest-growing brand and giving the company instant brand-building credibility after its spinoff from Fortune Brands Inc. last year.

The Deerfield-based company is expected to announce as early as Monday a new line of Skinnygirl vodkas, in tangerine, cucumber, coconut and “bare naked” varieties, with other products coming this spring.

“I don’t think we’ll see the triple-digit growth that we saw as we got a hold of it in its first year, but certainly we feel very good about Skinnygirl’s performance . . . and its prospects for further gains in 2012 and beyond,” Beam CEO Matthew Shattock told investors this month.

While Skinnygirl’s volume is small compared to that of Jim Beam, which ships more than 6 million cases annually, it’s quickly approaching the size of Maker’s Mark.

Skinnygirl’s popularity could make Beam itself more attractive as a takeover target as the company extends its reach beyond male-centric whiskeys such as Jim Beam, Canadian Club and Maker’s Mark. Skinnygirl “is a brand that certainly adds to their portfolio and makes them more valuable,” says David Henkes, a food and beverage analyst at Chicago-based consultancy Technomic Inc.

“Skinny” is making fat cats out of anyone who slaps that label on a product. Because the word can’t be trademarked on its own, bars and restaurants are rushing to create their own versions. Skinny-labeled drinks on menus have grown sixfold in the past year, with four times as many chains offering them today as a year ago, according to Technomic. Already, a few spirits companies have tried to draft off of Skinnygirl, including Los Angeles-based Voli Spirits LLC with its Voli light vodkas.

Gold Standard Enterprises Inc.Given how quickly Ms. Frankel revolutionized the margarita, the No. 1 cocktail in America, industry executives are salivating over what Skinnygirl could do for wine and vodka, which women consume more often. Women order margaritas during just 8 percent of their trips to bars and restaurants, Technomic says. By comparison, they order wine 22 percent of the time and mixed drinks 37 percent.

Beam is expected to launch Skinnygirl wines in white, red and rosé blends in April; they’ll be priced at $15 each, with a claim of 100 calories per 5-ounce serving. It also is expected to introduce a Skinnymini line of its cocktails to be sold in four-packs of 200-milliliter, single-serve bottles later this spring, industry sources say.