Bouncing back Experts: Hospitality industry is poised for a comeback 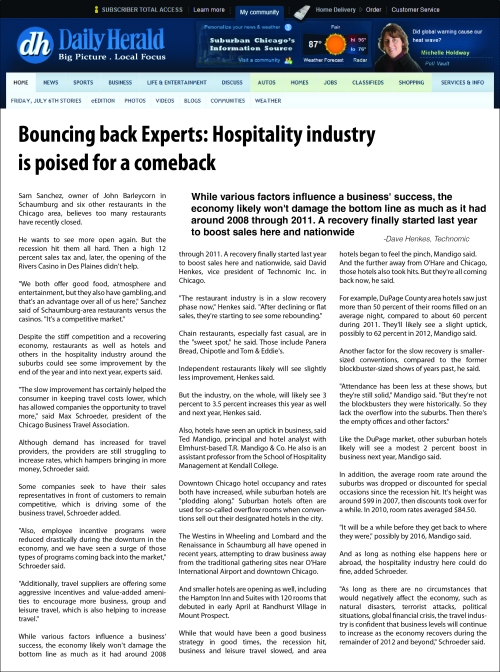 Sam Sanchez, owner of John Barleycorn in Schaumburg and six other restaurants in the Chicago area, believes too many restaurants have recently closed.
He wants to see more open again. But the recession hit them all hard. Then a high 12 percent sales tax and, later, the opening of the Rivers Casino in Des Plaines didn’t help.

“We both offer good food, atmosphere and entertainment, but they also have gambling, and that’s an advantage over all of us here,” Sanchez said of Schaumburg-area restaurants versus the casinos. “It’s a competitive market.”

Despite the stiff competition and a recovering economy, restaurants as well as hotels and others in the hospitality industry around the suburbs could see some improvement by the end of the year and into next year, experts said.

“The slow improvement has certainly helped the consumer in keeping travel costs lower, which has allowed companies the opportunity to travel more,” said Max Schroeder, president of the Chicago Business Travel Association.

Although demand has increased for travel providers, the providers are still struggling to increase rates, which hampers bringing in more money, Schroeder said.
Some companies seek to have their sales representatives in front of customers to remain competitive, which is driving some of the business travel, Schroeder added.

“Also, employee incentive programs were reduced drastically during the downturn in the economy, and we have seen a surge of those types of programs coming back into the market,” Schroeder said.

“Additionally, travel suppliers are offering some aggressive incentives and value-added amenities to encourage more business, group and leisure travel, which is also helping to increase travel.”

While various factors influence a business’ success, the economy likely won’t damage the bottom line as much as it had around 2008 through 2011. A recovery finally started last year to boost sales here and nationwide, said David Henkes, vice president of Technomic Inc. in Chicago.

“The restaurant industry is in a slow recovery phase now,” Henkes said. “After declining or flat sales, they’re starting to see some rebounding.”
Chain restaurants, especially fast casual, are in the “sweet spot,” he said. Those include Panera Bread, Chipotle and Tom & Eddie’s.
Independent restaurants likely will see slightly less improvement, Henkes said.

But the industry, on the whole, will likely see 3 percent to 3.5 percent increases this year as well and next year, Henkes said.
Also, hotels have seen an uptick in business, said Ted Mandigo, principal and hotel analyst with Elmhurst-based T.R. Mandigo & Co. He also is an assistant professor from the School of Hospitality Management at Kendall College.

Downtown Chicago hotel occupancy and rates both have increased, while suburban hotels are “plodding along.” Suburban hotels often are used for so-called overflow rooms when conventions sell out their designated hotels in the city.

The Westins in Wheeling and Lombard and the Renaissance in Schaumburg all have opened in recent years, attempting to draw business away from the traditional gathering sites near O’Hare International Airport and downtown Chicago.

And smaller hotels are opening as well, including the Hampton Inn and Suites with 120 rooms that debuted in early April at Randhurst Village in Mount Prospect.
While that would have been a good business strategy in good times, the recession hit, business and leisure travel slowed, and area hotels began to feel the pinch, Mandigo said.

And the further away from O’Hare and Chicago, those hotels also took hits. But they’re all coming back now, he said.
For example, DuPage County area hotels saw just more than 50 percent of their rooms filled on an average night, compared to about 60 percent during 2011. They’ll likely see a slight uptick, possibly to 62 percent in 2012, Mandigo said.

Another factor for the slow recovery is smaller-sized conventions, compared to the former blockbuster-sized shows of years past, he said.
“Attendance has been less at these shows, but they’re still solid,” Mandigo said. “But they’re not the blockbusters they were historically. So they lack the overflow into the suburbs. Then there’s the empty offices and other factors.”

Like the DuPage market, other suburban hotels likely will see a modest 2 percent boost in business next year, Mandigo said.
In addition, the average room rate around the suburbs was dropped or discounted for special occasions since the recession hit. It’s height was around $99 in 2007, then discounts took over for a while. In 2010, room rates averaged $84.50.

“It will be a while before they get back to where they were,” possibly by 2016, Mandigo said.

And as long as nothing else happens here or abroad, the hospitality industry here could do fine, added Schroeder.

“As long as there are no circumstances that would negatively affect the economy, such as natural disasters, terrorist attacks, political situations, global financial crisis, the travel industry is confident that business levels will continue to increase as the economy recovers during the remainder of 2012 and beyond,” Schroeder said.