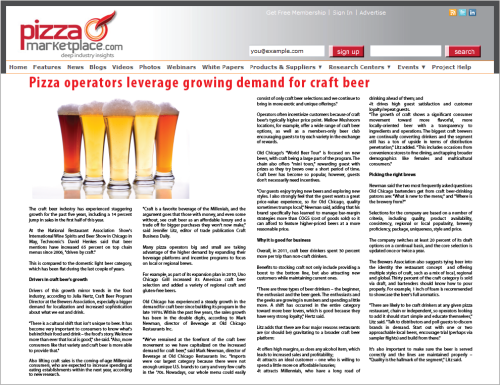 The craft beer industry has experienced staggering growth for the past five years, including a 14 percent jump in sales in the first half of this year.

At the National Restaurant Association Show’s International Wine Spirits and Beer Show in Chicago in May, Technomic’s David Henkes said that beer mentions have increased 65 percent on top chain menus since 2006, “driven by craft.”

This is compared to the domestic light beer category, which has been flat during the last couple of years.

Drivers of this growth mirror trends in the food industry, according to Julia Hertz, Craft Beer Program Director at the Brewers Association, especially a bigger demand for localization and increased sophistication about what we eat and drink.

“There is a cultural shift that isn’t unique to beer. It has become very important to consumers to know what’s behind their food and drink – the food’s story. We know more than ever that local is good,” she said. “Also, more consumers like that variety and craft beer is more able to provide that.”

Also lifting craft sales is the coming-of-age Millennial consumers, who are expected to increase spending at eating establishments within the next year, according to new research.

“Craft is a favorite beverage of the Millenials, and the argument goes that those with money, and even some without, see craft beer as an affordable luxury and a trade off for bigger purchases they won’t now make,” said Jennifer Litz, editor of trade publication Craft Business Daily.

Many pizza operators big and small are taking advantage of the higher demand by expanding their beverage platforms and incentive programs to focus on local or regional brews.

For example, as part of its expansion plan in 2010, Uno Chicago Grill increased its American craft beer selection and added a variety of regional craft and gluten-free beers.

Old Chicago has experienced a steady growth in the demand for craft beer since building its program in the late 1970s. Within the past few years, the sales growth has been in the double digits, according to Mark Newman, director of Beverage at Old Chicago Restaurants Inc.

“We’ve remained at the forefront of the craft beer movement so we have capitalized on the increased demand for craft beer,” said Mark Newman, director of Beverage at Old Chicago Restaurants Inc. “Imports were our largest category because there were not enough unique U.S. brands to carry and very few crafts in the ’70s. Nowadays, our whole menu could easily consist of only craft beer selections and we continue to bring in more exotic and unique offerings.”

Operators often incentivize customers because of craft beer’s typically higher price point. Mellow Mushroom locations, for example, offer a wide range of craft beer options, as well as a members-only beer club encouraging guests to try each variety in the exchange of rewards.

Old Chicago’s “World Beer Tour” is focused on new beers, with craft being a large part of the program. The chain also offers “mini tours,” rewarding guest with prizes as they try brews over a short period of time. Craft beer has become so popular, however, guests don’t necessarily need incentives.

“Our guests enjoy trying new beers and exploring new styles. I also strongly feel that the guest wants a great price-value experience, so for Old Chicago, quality sometimes trumps local,” Newman said, adding that his brand specifically has learned to manage bar-margin strategies more than COGS (cost of goods sold) so it can afford to feature higher-priced beers at a more reasonable price.

Why it is good for business

Benefits to stocking craft not only include providing a boost to the bottom line, but also attracting new customers while maintaining current ones.

“There are three types of beer drinkers – the beginner, the enthusiast and the beer geek. The enthusiasts and the geeks are growing in numbers and spending a little more. A shift has occurred in the entire category toward more beer lovers, which is good because they have very strong loyalty,” Hertz said.

Litz adds that there are four major reasons restaurants are (or should be) gravitating to a broader craft beer platform:

•It offers high margins, as does any alcohol item, which leads to increased sales and profitability;
•It attracts an ideal customer – one who is willing to spend a little more on affordable luxuries;
•It attracts Millennials, who have a long road of drinking ahead of them; and
•It drives high guest satisfaction and customer loyalty/repeat guests.
“The growth of craft shows a significant consumer movement toward more flavorful, more locally-oriented beer with a transparency to ingredients and operations. The biggest craft brewers are continually converting drinkers and the segment still has a ton of upside in terms of distribution penetration,” Litz added. “This includes occasions from convenience stores to fine dining, and tapping broader demographics like females and multicultural consumers.”

Newman said the two most frequently asked questions Old Chicago bartenders get from craft beer-drinking patrons are: “What is new to the menu;” and “Where is the brewery from?”

Selections for the company are based on a number of criteria, including quality, product availability, consistency, regional or local popularity, brewery proficiency, package, uniqueness, style and price.

The company switches at least 20 percent of its draft options on a continual basis, and the core selection is updated once or twice a year.

The Brewers Association also suggests tying beer into the identity the restaurant concept and offering multiple styles of craft, such as a mix of local, regional and global. Thirty percent of the craft category is sold via draft, and bartenders should know how to pour properly. For example, 1 inch of foam is recommended to showcase the beer’s full aromatics.

“There are likely to be craft drinkers at any given pizza restaurant, chain or independent, so operators looking to add it should start simple and educate themselves,” Litz said. “Talk to distributors and poll guests to discern brands in demand. Start out with one or two approachable local beers, encourage trial (perhaps via sampler flights) and build from there.”

It’s also important to make sure the beer is served correctly and the lines are maintained properly – “Quality is the hallmark of the segment,” Litz said.