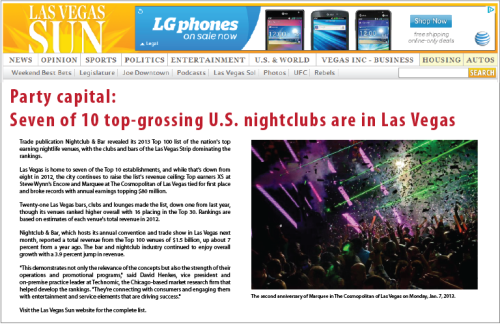 Trade publication Nightclub & Bar revealed its 2013 Top 100 list of the nation’s top earning nightlife venues, with the clubs and bars of the Las Vegas Strip dominating the rankings.

Las Vegas is home to seven of the Top 10 establishments, and while that’s down from eight in 2012, the city continues to raise the list’s revenue ceiling: Top earners XS at Steve Wynn’s Encore and Marquee at The Cosmopolitan of Las Vegas tied for first place and broke records with annual earnings topping $80 million.

Twenty-one Las Vegas bars, clubs and lounges made the list, down one from last year, though its venues ranked higher overall with 16 placing in the Top 30. Rankings are based on estimates of each venue’s total revenue in 2012.

Nightclub & Bar, which hosts its annual convention and trade show in Las Vegas next month, reported a total revenue from the Top 100 venues of $1.5 billion, up about 7 percent from a year ago. The bar and nightclub industry continued to enjoy overall growth with a 3.9 percent jump in revenue.

“This demonstrates not only the relevance of the concepts but also the strength of their operations and promotional programs,” said David Henkes, vice president and on-premise practice leader at Technomic, the Chicago-based market research firm that helped develop the rankings. “They’re connecting with consumers and engaging them with entertainment and service elements that are driving success.”