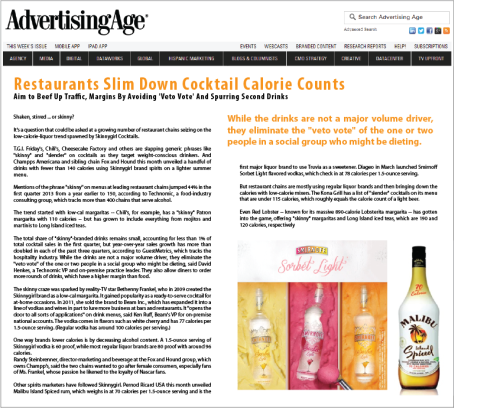 It’s a question that could be asked at a growing number of restaurant chains seizing on the low-calorie-liquor trend spawned by Skinnygirl Cocktails.

T.G.I. Friday’s, Chili’s, Cheesecake Factory and others are slapping generic phrases like “skinny” and “slender” on cocktails as they target weight-conscious drinkers. And Champps Americana and sibling chain Fox and Hound this month unveiled a handful of drinks with fewer than 140 calories using Skinnygirl brand spirits on a lighter summer menu.

Mentions of the phrase “skinny” on menus at leading restaurant chains jumped 44% in the first quarter 2013 from a year earlier to 150, according to Technomic, a food-industry consulting group, which tracks more than 400 chains that serve alcohol.

The trend started with low-cal margaritas — Chili’s, for example, has a “skinny” Patron margarita with 110 calories — but has grown to include everything from mojitos and martinis to Long Island iced teas.

The total share of “skinny”-branded drinks remains small, accounting for less than 1% of total cocktail sales in the first quarter, but year-over-year sales growth has more than doubled in each of the past three quarters, according to GuestMetrics, which tracks the hospitality industry. While the drinks are not a major volume driver, they eliminate the “veto vote” of the one or two people in a social group who might be dieting, said David Henkes, a Technomic VP and on-premise practice leader. They also allow diners to order more rounds of drinks, which have a higher margin than food.

The skinny craze was sparked by reality-TV star Bethenny Frankel, who in 2009 created the Skinnygirl brand as a low-cal margarita. It gained popularity as a ready-to-serve cocktail for at-home occasions. In 2011, she sold the brand to Beam Inc., which has expanded it into a line of vodkas and wines in part to lure more business at bars and restaurants. It “opens the door to all sorts of applications” on drink menus, said Ken Ruff, Beam’s VP for on-premise national accounts. The vodka comes in flavors such as white cherry and has 77 calories per 1.5-ounce serving. (Regular vodka has around 100 calories per serving.)

One way brands lower calories is by decreasing alcohol content. A 1.5-ounce serving of Skinnygirl vodka is 60 proof, while most regular liquor brands are 80 proof with around 96 calories.

Randy Steinbrenner, director-marketing and beverage at the Fox and Hound group, which owns Champp’s, said the two chains wanted to go after female consumers, especially fans of Ms. Frankel, whose passion he likened to the loyalty of Nascar fans.

Other spirits marketers have followed Skinnygirl. Pernod Ricard USA this month unveiled Malibu Island Spiced rum, which weighs in at 70 calories per 1.5-ounce serving and is the first major liquor brand to use Truvia as a sweetener. Diageo in March launched Smirnoff Sorbet Light flavored vodkas, which check in at 78 calories per 1.5-ounce serving.

But restaurant chains are mostly using regular liquor brands and then bringing down the calories with low-calorie mixers. The Kona Grill has a list of “slender” cocktails on its menu that are under 115 calories, which roughly equals the calorie count of a light beer.

Even Red Lobster — known for its massive 890-calorie Lobsterita margarita — has gotten into the game, offering “skinny” margaritas and Long Island iced teas, which are 190 and 120 calories, respectively.