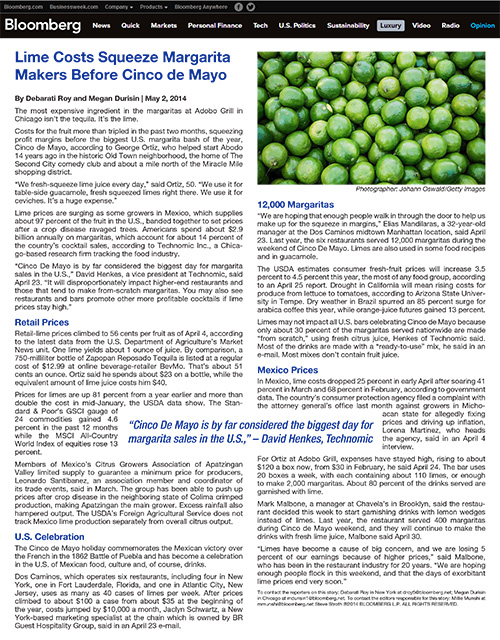 The most expensive ingredient in the margaritas here at Adobo Grill isn’t the tequila. It’s the lime.

Costs for the fruit more than tripled in the past two months, squeezing profit margins before the biggest U.S. margarita bash of the year, Cinco de Mayo, according to George Ortiz, who helped start Abodo 14 years ago in the historic Old Town neighborhood, the home of The Second City comedy club and about a mile north of the Miracle Mile shopping district.

“We fresh-squeeze lime juice every day,” said Ortiz, 50. “We use it for table-side guacamole, fresh squeezed limes right there. We use it for ceviches. It’s a huge expense.”

Lime prices are surging as some growers in Mexico, which supplies about 97 percent of the fruit in the U.S., banded together to set prices after a crop disease ravaged trees. Americans spend about $2.9 billion annually on margaritas, which account for about 14 percent of the country’s cocktail sales, according to Technomic, a Chicago-based research firm tracking the food industry.

“Cinco De Mayo is by far considered the biggest day for margarita sales in the U.S.,” David Henkes, a vice president at Technomic, said April 23. “It will disproportionately impact higher-end restaurants and those that tend to make from-scratch margaritas. You may also see restaurants and bars promote other more profitable cocktails if lime prices stay high.” END_OF_DOCUMENT_TOKEN_TO_BE_REPLACED