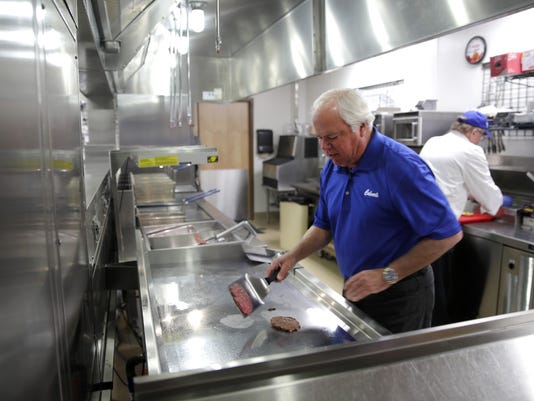 Craig Culver, 68, uses a large, perfectly polished metal spatula to press the beef into perfectly round patties, with the help of an equally well-polished round metal canister. That grill isn’t quite hot enough, by the way, he comments.

I’ve watched (maybe secretly wishing I was in) the Culver’s commercials with the restaurant’s co-founder surprising customers, offering to bring them into the kitchen as he cooks their burgers. That was a tricky shoot, Culver says, because they were doing it during lunch hours at a Culver’s in Tampa, Florida. END_OF_DOCUMENT_TOKEN_TO_BE_REPLACED 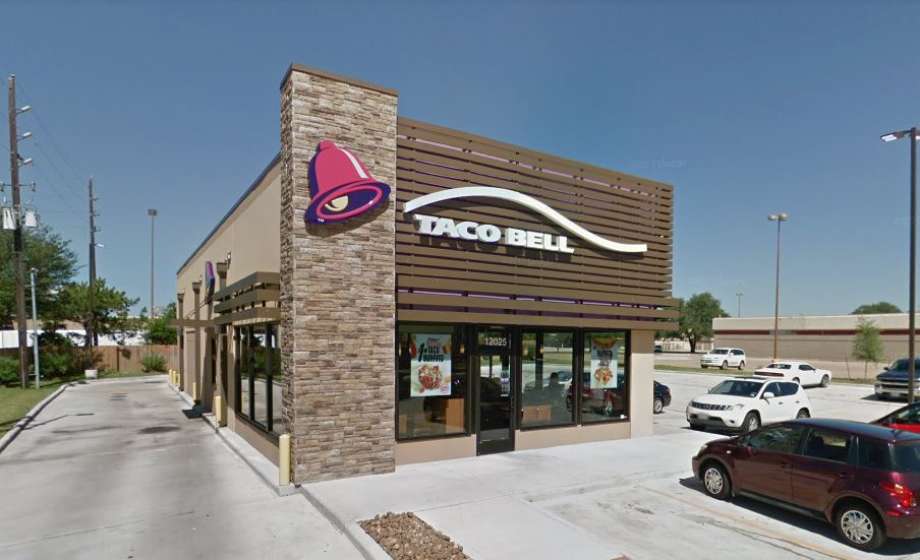 Lovers of chalupas and crunch wraps have spoken: Taco Bell is now bigger than Burger King.

The Mexican-themed chain eclipsed its burger rival in U.S. sales last year, becoming the fourth-largest domestic restaurant brand, according to a preliminary report by research firm Technomic. McDonald’s, Starbucks and Subway Restaurants held on to the top three spots.

Taco Bell’s systemwide sales — the total sales of restaurants that carry the brand — jumped 5 percent in the U.S. to about $9.8 billion in 2017. The company, owned by Yum! Brands, has made inroads with indulgent fare, along with $1 items that appeal to budget-strapped millennials.

McDonald’s, Taco Bell, IHOP and other chain restaurants have hidden health gems in their menus

Though Burger King has fared better than many restaurants brands in recent years, it hasn’t kept pace with its biggest burger rivals — McDonald’s and Wendy’s Co. — or chains like Taco Bell. Its domestic sales rose just 1.5 percent in 2017, according to the Technomic report, which will be finalized in March.

“They certainly continue to do pretty well, and bring out some interesting and new menu items,” Henkes said. “They’ve done a good job of connecting with the millennials and Gen Z.”

What The Hell Just Happened To Diet Coke? 2018 Edition

Diet Coke is in a rut. Sales have been falling and people are trading in their diet sodas for other zero-calorie beverages like LaCroix and waters both bubbly and still. So Coca-Cola is giving its 36-year-old brand a massive facelift, and it’s launching four new millennial-oriented Diet Coke flavors. “Twisted mango,” “zesty blood orange,” “feisty cherry” and “ginger lime” Diet Coke, as well as the classic Diet Coke flavor, will come in slim, candy-colored cans rather than the classic silver cylinder that’s been a marker of the brand for years.

The new products will be available in the US later this month and in Canada in February. The old-fashioned Diet Coke with lime and Diet Coke Cherry that are currently available will only be sold on Amazon hereafter.

“We love the essence of Diet Coke and we don’t want to throw it away — just modernize it so we can re-express it for a new generation of fans,” said Rafael Acevedo, Coca-Cola North America’s group director for Diet Coke, in an interview with BuzzFeed News. He compared it to how the James Bond franchise, which “had a winning formula,” needed an update and came up with a “rougher, more personable” Bond with Daniel Craig.

Sales of diet colas fell 3.5% last year; Acevedo said Diet Coke declined about that much as well. Still, annual sales of Diet Coke in the US exceed $2.1 billion and thousands of cans of Diet Coke are consumed every minute, he said — so despite some very real troubles, the brand still has a lot of fans.

David Henkes, senior principal at the food industry consultancy Technomic, said on Twitter, “Interesting facelift for an iconic brand. Still, soft drink sales are losing out to other types of beverages and getting young consumers back will be a challenge.”

Diet Coke’s primary challenge: millennials, of course. The product’s main customer base is made up of boomers — white boomers, to be exact.

“Eighty percent of Diet Coke consumption is Anglo,” said Acevedo. “We believe that to recruit a new generation, we have to appeal to them, and millennials are 40% multicultural.” Beverage marketers have taken note that young people — and Latinos — love flavors. So here we are, with mango- and zesty blood orange–flavored Diet Coke. The “feisty cherry,” Acevedo said, is a little spicier than the old cherry flavor.

The new slimmed-down cans have the same shape and silver color as Coca-Cola’s Dasani Sparkling, giving the revamped Diet Coke an appearance more similar to the zero-calorie sparking water than to the other Cokes and sodas. And fear not: The rebrand didn’t change the basic Diet Coke recipe, while the new design conveys a subtle cue to consumers who have increasingly switched to sparkling waters over caloric sodas and artificially sweetened diet beverages.

That, and Coca-Cola “wanted to make sure packages are Insta-ready,” said Acevedo.

Keenan Beasley, co-founder and managing partner at marketing agency BLKBOX, said any impact of the rebrand may be short-lived. “Millennials for years have rejected the idea of soda due to health concerns. This is the bigger issue for Diet Coke and the Coke franchise. They still have to face this issue head on.”

Diet Coke’s rebrand is the result of two years of work deciding among 30 original options based on feedback from 10,000 consumers. It will include a “significant investment” to promote the product, according to Coca-Cola, including advertising during the Winter Olympics, billboard ads, and free samples.

Coca-Cola in 2016 announced a “One Brand” approach to unite the marketing of its various Cokes. The company introduced a new look for Diet Coke in Mexico that did away with the iconic silver can, but at the time, it said that it would consider “how it will integrate Diet Coke into the ‘One Brand’ strategy” in the US. It looks now like Diet Coke is going its own way.

ARLINGTON HEIGHTS (AP) — Since Jan. 8, 1993, Frank Portillo Jr.’s thoughts at this time of year have been with seven people.

Portillo was president of Brown’s Chicken and Pasta when franchisees Richard and Lynn Ehlenfeldt and employees Michael Castro, Guadalupe Maldonado, Thomas Mennes, Marcus Nellsen and Rico Solis were found dead in a now-former restaurant at Smith Street and Northwest Highway in Palatine.

Accompanied by another Brown’s executive, Portillo raced to the scene from his West suburban home early that morning 25 years ago after seeing a television newscast about what happened.

The sad memories of that day can surface for him at any time, but they have been a given on Jan. 8 each year.

“I’ve never experienced such emotion in my entire life,” said Portillo, 84. “And it is just something that will probably be with me until the day I die. I don’t cry anymore. It used to be for a long time, I’d think of it and tears would come into my eyes when I would talk about it. I just remember the victims’ families. That was just heartbreaking.”

Unsolved for nine years, the case was cracked open in 2002. Former restaurant worker Juan Luna and friend James Degorski were convicted and sentenced to life in prison without the possibility of parole.

Stressing that his problems will never compare to the tragedy that struck the victims’ families, Portillo found himself trying to cope with the murders while running a popular restaurant chain that suddenly found itself in a financial free fall. After the killings, the company saw two consecutive years of more than 30 percent sales declines.

Crisis communications experts and major vendors urged Portillo to change the eateries’ name in hopes of turning around the business, said his daughter, Toni.

He refused out of loyalty to John Brown, whose first fried chicken restaurant opened in Bridgeview in 1949. Portillo partnered with Brown to start franchising the eatery in 1965. Brown died about a month before the Palatine killings.

“He figured it was disrespectful,” said Toni Portillo, who became company president in 2006 and served in that capacity until an investment group bought Brown’s in a bankruptcy auction four years later. “If we had to do it all over again, we should have changed the name. And my dad and I talk about it a lot.”

The murders ended a 20-year period of growth for the chain. From the early 1970s until 1993, the chain expanded to about 300 locations in 13 states, Toni Portillo said.

But restaurants started to close amid eroding sales after Jan. 8, 1993, which the Portillos blamed in part on the stigma from what commonly has been called the “Brown’s Chicken massacre.” Customers voiced fears about visiting the restaurants at night.

Today, the chain is down to 23 restaurants, all in Illinois, according to its website.

The Portillos estimate at least 3,000 people were affected by the closures, a figure they base on a typical number of employees, franchisees and their families. Brown’s filed for bankruptcy in 2009 and it was scooped up by Pop-Grip LLC for $585,000 in 2010.

“It was a terrible tragedy,” Frank Portillo said, “and the business people that owned Brown’s (restaurants), they had nothing to do with the tragedy, but yet their investments got hurt pretty bad.”

Despite the company’s struggles, Brown’s remains in Palatine. Portillo said it was important to him and many customers to keep a location in the suburb, so another Brown’s opened in 1995 near Hicks Road and Northwest Highway.

Michael Halter and a partner bought the location in 1998. He said he’s asked every day whether his restaurant is the site of the killings.

“It’s still in people’s minds,” he said, adding that the restaurant has done well over the years, thanks to a loyal clientele.

David Henkes, senior principal at food-service research firm Technomic Inc., said Brown’s now is considered a “minor chain” in the restaurant industry. It ranked 831st among the 1,500 chains followed by Technomic in its latest report from 2016, and it has fallen from a $36 million business in 2001 to about $24.3 million in sales two years ago.

Chicago-based Technomic’s research shows Brown’s sales have declined by a half percent annually between 2013 to 2016, a time in which fried-chicken restaurant revenue has been rising overall.

“Listen, what’s done is done and they are where they are,” Henkes said. “That was 25 years ago, so there’s a lot of consumers who weren’t even born then. Look at a lot of the millennials and the Gen Y’s — that ‘93 is ancient history for a lot of them.”

Toni Portillo said she now believes it was for the best Brown’s was acquired by Pop-Grip, allowing her father to enjoy retirement with his wife of 66 years, Joan. Frank Portillo said the murders on Jan. 8, 1993, led him to become a good-government crusader who pushed for tougher gun laws.

“It made my dad a different person,” Toni Portillo said.